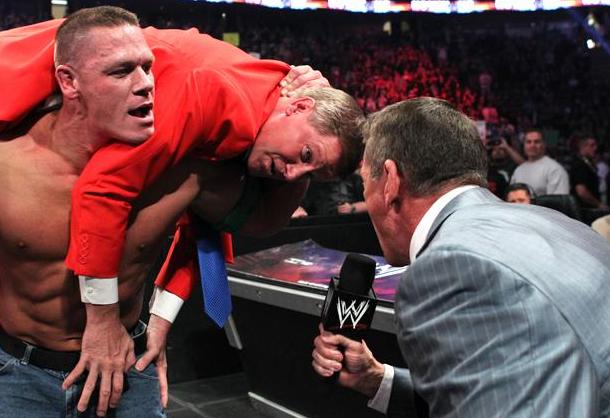 On last week’s WWE Raw, Vince McMahon’s job assessment of John Lauranaitis came to an end, and the answer was not favourable for the general manager of both Raw and Smackdown. After Big Show’s disappointing outcome at WWE’s No Way Out PPV, things got worse as Vince McMahon uttered his most famous phrase: “You’re fired!”

Although the odds we see Lauranaitis on television again are better than not, I always get a chuckle at the overdramatic McMahon gritting his infamous catchphrase into the mic.
With that in mind, let’s take a look back at some of the greatest firings in WWE history.

Perhaps the greatest pure wrestler of the 2000`s, Kurt Angle was known to take part in some intriguing and perplexing storylines.

This one involves Angle hurting his neck and becoming the General Manager of Smackdown. As GM, Angle abused his power and forced matches and firings that only suited his personal agenda. In response, Vince McMahon returns and doesn’t particularly enjoy others abusing the power he`s known to abuse himself. Watch below as the Olympic gold medalist is forced onto his knees to beg for a job.

Now why is this important you ask? The firing of Jarrett paved the way for the birth of TNA, which gave many WCW outcasts who weren’t contracted by the WWE a place to earn a paycheck. Although the “You’re Fired” phrase was not uttered, the message may have been more louder and clear than any other firing in WWE history.

If Jim Ross has been fired the most times, Mick Foley is a close second. Foley has played more characters in WWE than perhaps anyone else and in the process has spent a lot of time flipping between a fan-friendly hero and a hated psychopathic villian.

This particular example is from the summer of 1998. After losing a hotly contested, action packed match to Steve Austin the night before, Foley came to the ring to apologize to Vince McMahon for not defeating the Texas Rattlesnake.

In an impressive verbal battle, Foley is able to go from bad guy to absolutely adored by the fans. He admits his shortcomings and that Austin was the better man. In response, McMahon informed Foley his services were no longer needed. The image of Foley sitting in a chair with his head down while McMahon dances to the Dude Love theme song is burned into my memory.

The children of Vince McMahon, Steph and Shane betrayed their father in the Spring and Summer of 2001 as part of the infamous Invasion angle. Shane swooped in under his father’s nose and bought WCW out from right underneath of him. Shortly after, Paul Heyman and Stephanie McMahon announced a business partnership to bring ECW into the fold.

After a summer of the WWE vs. the WCW/ECW Alliance, things came to an end at the 2001 Survivor Series where (shocker alert) WWE came out on top.

The following night, McMahon took to the centre of the ring to fire his own children. Yes, it was as ridiculous as it sounds.

While we’re on the topic of The Alliance, we can’t forget the third owner: Paul Heyman. After years as Paul E. Dangerously in WCW, Heyman took things to the extreme.

Heyman became booker and eventual owner of the now famed ECW. After years of reinventing the wrestling world as we know it, Heyman was forced to close his doors due to financial difficulties.

The ECW had its last hurrah (if we do not count the 2006 debacle) during the Alliance angle where Heyman attempted a takeover of the WWE.

Instead, like Stephanie and Shane, Heyman fell victim to Vince’s axe the night following Survivor Series 2001. The stupid grin on his face did not last long as Vince made short work of firing the extreme one.

As a 14 year old boy with little idea of what “dirt sheets” were, I was genuinely wide-mouth stunned when Eric Bischoff walked onto WWE Raw as the new general manager. Ideas such as “HLA – Hot, Lesbian, Action” and “Raw Roulette” were spawned during Bischoff’s time as general manager.

Whether you loved or hated Bischoff’s time with the company, there was a certain amount of gratification in watching Eric Bischoff fired live on WWE’s signature show.

Twice in the span of three years, Vince McMahon had the opportunity to fire his former arch-nemesis Eric Bischoff live on television. There’s something oddly amusing about watching Bischoff mope away from the ring while the gravel voiced, strutting, dancing, McMahon sang “Goodbye”.

After months of maniacal actions, Randy Orton’s personal attacks on Triple H and Stephanie McMahon had become too much for Vince McMahon. Home invasions and last man standing matches throughout the latter half of 2008 had made Orton into one of the most vicious and venomous heels in WWE history.

Just weeks before the 2009 Royal Rumble, McMahon called Orton to the ring. McMahon demanded an apology “or else”. The attempted firing resulted in one of the most horrific incidents in the history of WWE Raw. As McMahon went to utter “You’re fired”, Orton caught him with a cheap shot, flooring the CEO. After that came the unthinkable as McMahon took a vicious punt to the skull, rendering him unconscious and Orton the most hated heel on the roster.

A list of famous WWE firings simply would not be complete without Jim Ross. The man’s been fired more times than anyone else and the irony of the situation is that he is seemingly a model employee.

Despite this, Ross has always had a rebellious streak in him. Case in point: the week after Steve Austin stunned the entire McMahon family, Ross, Jonathan Coachman and Jerry Lawler were called to the ring. After Coachman and Lawler were forced to apologize for sitting by and not helping the McMahons, Ross refused . He only apologized to Linda McMahon and refused to apologize to Stephanie and Shane. As you can see below, things didn’t turn out so well for ‘Good Ol’ JR.